You’ll find additional hints for each of the tasks. Please be careful, if you read too far you’ll find some serious spoilers!

If you click onto the end of the path, you’ll “walk” along.

Where is Simon Dicksons mansion located? You’re after his money, first try at his place!

Have you read Fiona’s letter (bottom right)? Maybe you find some informations about the location of his home.

Padlock at the gate:

Have you found Fiona’s postcard? She must have dropped it right behind the gate. Could you identify the four animals on the backside?

Did you take a close look at the animal tracks in front of the gate? Can you match them to the animals at the postcard?

Count the corresponding animal tracks and try the numbers at the padlock in the order from the postcard: horse – pig – dog – cat.

Keypad at the gate in front of the mansion:

Button “C” will reset the code so you can start over again. Klick the key to confirm the code.

Have you been attentive while walking in the forest? Maybe you missed something – you can walk back a bit (by clicking at the path) and take a closer look!

There were three trees along the path, where somebody carved numbers into the bark. Also note the positions within the squares!

The first digit is 5. (center-center)

Knock at the door!

If you click the doorknob, you’ll hear a sound sequence. Each of the four door knockers makes a different sound.

Try to replay the sequence by clicking the door knockers in the correct order!

Listen carefully to the sound each of the breakers make when you switch them!

One of the circuit breakers sounds different. That’s the one that should stay in the “up” position.

Did someone scratch the wall right next to the door?

Something is hidden underneath the sixth chair from the left. Take a look!

It looks as if you could almost guess some of the words?

Some letters have been replaced by strange signs. As a small hint you’ll see the translation of the first signs written above.

Maybe write down the note to a sheet of paper (or print it!). You already know the translation of the letters “i” and “n”. Now write them above all other occurences of these signs.

Did you know, “e” is the most common letter in our language?

What could the second word be… maybe “order”? Now you know some more letters! Can you guess more words now?

“In order to turn on the lights, the circuit breakers on the ground floor must be set correctly. It’s important that the first and third switch are in the up position. The others should be in the down position.”

Counting begins with the small circuit breakers on the right of the one that resets them all. Keep no. 1 and 3 in the up position, switch all the other small ones down. Then turn on the leftmost one – the ground floor lights should be switched on now!

ground floor lights have been turned on

Take a look around, now that it’s no longer dark down here!

Did you notice the vase? The one below the light?

If you click onto the vase, you’ll find a key.

Where might that key you found inside the vase fit? Go upstairs again – but first you’ll need to adjust the light once more – you’ve successfully done so before. If you can’t remember, look at “fuse box I”.

The key unlocks the door upstairs.

There’s a lot to look at here! How long has it been since you were at the hairdresser’? Since the lockdown began? Lucky you, there are some mirrors here, take a look!

Just after you’ve taken a look in both mirrors you discover that someone scratched the walls again. But… what does it read?

Count the objects which are written on the wall!

Did you count all the chairs?

In the order as seen in the mirror: enter the number of objects at the keypad next to the door.

chairs – mirrors – sconces are the words which can be assembled from viewing both mirrors. There are twelve chairs, two mirrors and four sconces. Enter 1 2 2 4 at the keypad next to the door and click the key button.

the salon II (why is that door still locked?)

The code you entered was correct, but the door is still locked. Maybe you activated something else in that salon? Take a look around!

Next to the small lamp on the table you find four switches. Are they still working?

Next to the switches you find a painting on the wall. What did the artist draw? Is it really the room we’re in?

The switches turn the sconces on and off.

Just two of the sconces are lit up in that painting. Why is that?

The small lamp on the table is on the wrong side. Maybe the artist painted the room as seen through a mirror?

Turn on the sconces as seen on the painting – mirrored. So, turn on the second and fourth lamp from the left – the door will unlock and you can go on.

Did you find the notes with the flags?

Did you find the vault? Where could it be hidden?

The vault behind the painting has a five digit code. Did you find all five flags? Maybe these two fit together?

Could you identify the countries depicted by the flags? Did you find these countries on the map?

Did you find the corresponding countries on the map, and the numbers associated with them?

Which three persons could fit that description? Beards, Hats etc…

There are people on the banknotes in the vault. Maybe three of them can be clearly identified?

The persons described yield the numbers 5 8 3 from the banknotes.

Did you find the key? Where will it work? Somewhere close the bookshelf…

That’s a strange torchlight. Is it UV? By using it you can see details, where nothing seemed to be before!

Take a look below the carpet now!

Did you find all four notes with some strange doodles?

Take a look above the bookshelf. Is there a connection?

The vault is hidden behind the painting. Below is a note with two flags: Sweden & Portugal.

The second part of the note is inside the cigar box with flags of Canada, Brazil and Australia.

The world map on the wall shows the numbers 2 8 7 4 1 for these countries – and that’s the code to open the vault.

The first letter inside the typewriter reads:

“I am a man of science,
No-one could deny that.
With glasses but no facial hair,
Say, have you met my cat?”

In second drawer on the right you find:

“No noblewoman, I
You’ll find me in the camp.
With my bonnet and my ribbon,
I’m the lady with the lamp.

I am a great researcher,
I won the Nobel Prize,
With a brush moustache (but not a beard!)
Have I saved countless lives.”

Inside the vault you’ll see a doodle of the antler on the wall top left, which points downwards.

There are also nine banknotes inside. The descriptions of the persons on the banknotes gives the code 5 8 3 – that’s the code of the padlock of the drawer on the left hand side of the desk. Inside is a key to the locked part of the shelf. There you find the UV-torchlight and a doodle of the antler top-center on the wall, pointing to the left.

Using the UV-torchlight you’ll see something below the carpet. The top-right antler points to the left.

Inside the left drawer you see a doodle of the wide antler (bottom on the wall), which points to the right.Turn all four antlers to the correct direction and you made it!

Still open questions for us?

Crime Runners is here for you! Just visit the contact section! 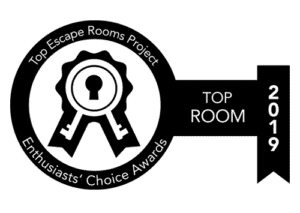 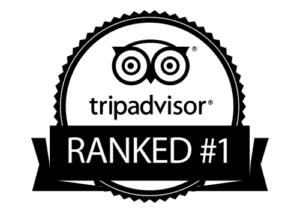 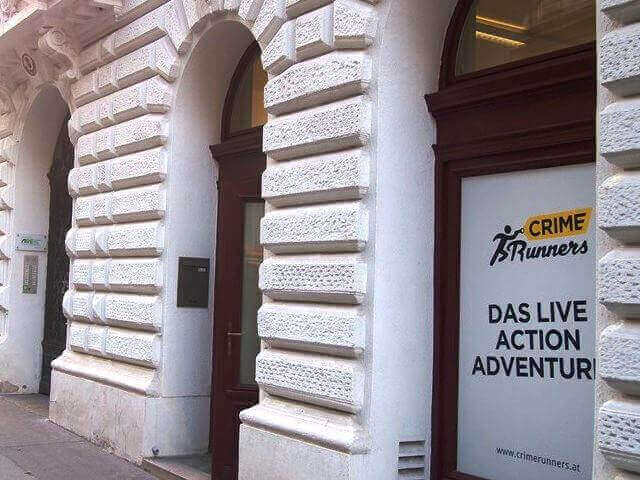